We worship in-person and online each Sunday morning at 11 AM! Visit our Worship Page for more information. 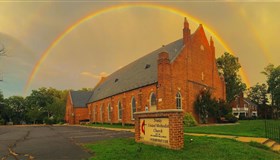 There were fewer than twenty Methodist preachers in America when on November 20, 1774, a young preacher, William Duke, galloped into Alexandria. Duke had been personally recruited to the ministry by Francis Asbury, the legendary preacher who later was to be authorized by John Wesley to serve as general superintendent of the Methodist movement in the fledgling United States of America. Duke preached to a small group of followers and noted in his journal: "Formed them into a society." From this date, Trinity has remained in continuous existence.

Trinity has utilized three meeting houses: 1791, 1804 (both in downtown Alexandria) and its present building, and 1942. Francis Asbury drew the plan for the first meeting house and dedicated the second. Virtually all the greats of early American Methodism visited Trinity.

The building of the second meeting house, 1804, and the religious revivals of the early 1800's greatly increased Trinity's membership. President George Washington died in December 1799, and a series of four memorial sermons, sponsored by the citizens of Alexandria, were presented in his honor. One was given by station preacher James Tolleson, reflecting a growing community respect for the fledgling Methodist congregation. And when British troops landed in Alexandria during the War of 1812, members of Trinity scattered in fear.

By the early 1840's, Trinity's membership reached roughly 1,000 persons. By now the features of a modern-day church were appearing: Sunday school classes for all ages, women's groups, and the Official Board. Missions and compassionate social programs received major attention. As early as 1816, for example, Trinity set up a Society for the Relief of the Poor, to help those in the congregation who needed aid.

From its earliest beginnings, however, American Methodism was rent by serious dissident movements. First, starting in 1792, came the O'Kelly Schism, when a southside Virginia preacher, James O'Kelly, unhappy with the ecclesiastical power of the bishops, walked out of General Conference in Baltimore. He and his followers, known as O'Kellyites, set up their own churches. Next, in 1829, came the Methodist Protestant secession and in the 1840's the dispute over slavery. Trinity was deeply affected by all three schisms.

The O'Kellyites, for example, operated preaching places in Alexandria. Many Trinity members were attracted to these venues and some of these people would leave in 1829 to join the Methodist Protestants. They built a new church very close to Trinity. The growing national debate over slavery would soon bring a third Methodist Church, this time almost directly across the street from the Second Meeting House. Hence, in one block on Washington Street would be three Methodist churches, all hostile to one another.

The slavery issue had long concerned Trinity. In May 1785, Trinity leaders had arranged a personal interview with General George Washington at Mount Vernon for bishops Thomas Coke and Francis Asbury. The bishops had a private interview with the General regarding the emancipation of slaves.

Meanwhile in the 1840's an increasingly bitter debate erupted in the Methodist Episcopal Church. At a momentous General Conference in New York City in 1844, a resolution, co-sponsored by Trinity's pastor, Alfred Griffith, demanded that a Southern bishop who owned slaves should resign. The resolution passed. The next year, 1845, the Methodist Episcopal Church, South, was formed.

Trinity exploded. Many pro-Southern members left and formed a pro-Southern church directly across the street from the Trinity meeting house (known today as the Washington Street Church). A long legal battle ensued over church property and for roughly a year the building was closed. On June 17, 1850, the Court returned the building to the Northern Group. Trinity became known as the Northern Church and the Washington Street Church was the Southern Church.

During the Civil War (1861-1865), federal authorities occupied the Southern Church. Trinity, with regular worship services, was not interrupted.

For Trinity, the period after the Civil War (1865 to 1942) would become known as the long and hard years. A cadre of faithful, conscientious, and dedicated lay people worked desperately to keep the congregation alive. Budgets were small, seldom fully subscribed, and membership dwindled.

In 1939 the three main branches of Methodism, the Methodist Episcopal Church (North) and the Methodist Episcopal Church, South, along with the Methodist Protestant Church, merged to form the Methodist Church. Virginia Bishop W.W. Peele assigned a young minister, John H. Blakemore, to Trinity with instructions to merge with the Washington Street Church. But Trinity - at age 168 - gave its own defiant answer! It would not merge and Trinity, using Biblical imagery, cast its nets elsewhere, deciding to move the entire church (building and all) from downtown Alexandria to the suburban Beverley Hills-Braddock area, with the young pastor as the leading cheerleader.

The Third Meeting House took almost a year to build at the corner of Cameron Mills Road and Allison Street, using materials from the downtown church, such as bricks, pews, and stained glass windows. Dedication came on Christmas Sunday, 1942.

After World War II, Trinity grew and flourished in its new location. Its members joined many other Methodists throughout the country in their concern for ecumenism and church union, including closer ties with other Methodist and Wesleyan bodies; growing uneasiness with the issue of racism in both the nation and the church; and the debate about women's ordination. Closer to home, Trinity members continued a rich legacy of worship to God and service to their needy neighbors in the larger Alexandria community.

As in the past, Trinity has continued to provide leadership in navigating significant cultural shifts. Within The United Methodist Church, debates concerning human sexuality, particularly over such matters as homosexuality, marriage, and abortion, have presented sizable domestic, international, and ecumenical disagreements over the church's doctrine and discipline. In addressing this concern, in 2015, after a time of congregational prayer, discernment, and discussion, Trinity elected to become a member of the Reconciling Ministries Network. In doing so, the following Welcome Statement was formulated and presented:

Whoever welcomes you welcomes me,                                                                 and whoever welcomes me welcomes the one who sent me. - Matthew 10:40          "Trinity United Methodist Church is committed to be a congregation of Open Hearts, Open Minds, and Open Doors. We believe all people are of sacred worth and dignity as part of God's creation and as demonstrated by the life and ministry of Jesus Christ. As God's love extends to all, we welcome everyone without exception, regardless of age, race, ethnicity, gender, family structure, socio-economic or marital status, sexual orientation, gender identity, physical or mental ability, faith history or life experience. We recognize that we are all different, and those differences make us a stronger community of faith as we worship together to grow in our relationship with God and one another."

With such a rich history, the people of Trinity celebrate their grace-filled legacy and faithfully face the future, living into a God-given vision of creating community for all people.